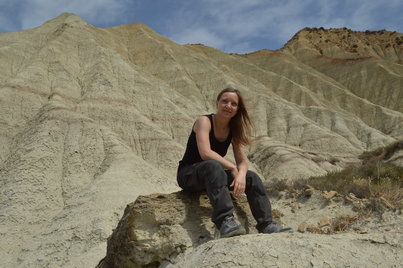 My scientific activity focuses on palynological record from sediments deposited during the Late Cretaceous (~100.5 ma) and the Quaternary (~2,6 ma)  recovered from industrial and scientific cores and natural outcrops in sub/Arctic and near-equatorial regions. I use tiny resting capsules of dinoflagellates, single-celled marine organisms, that create chemically generated light, causing ocean waves to sparkle at night. The capsules, so called ‘resting cysts’, produced during their life cycle in surface waters, settle to oceanic depths and preserve in the accumulating sediment for millions of years. In addition to their conventional, biostratigraphic and palaeoenvironmental application (e.g. Radmacher et al., 2015; Radmacher et al., 2020c) I am highly interested in the unconventional approach of using these microscopic fossils. I have already combined this method with numerical model simulations to provide global palaeoceanographic reconstruction (Radmacher et al., 2020a); and with trace fossil record to establish past basin bottom-water oxygen level (Radmacher and Uchman, 2020b). Currently, I am working on correlation of dinoflagellate cyst record from ODP cores 984 and 986 (Ocean Drilling Program Expedition Leg 162) with the correlation of dinocysts records to records from air bubbles in Antarctic ice cores.

From 2016: Biostratigraphic and palaeoenvironmental research aiming to establish conditions during formation of the Upper Cretaceous sediments in the Panamian Isthmus (Yucatán Peninsula), to be tested by numerical model simulation. By finding the best match of geological proxies to simulation results we aim to find the most probable scenario for the latest Cretaceous palaeoceanography and climate. Institutions involved in this project include: the Centro Univeristario del Norte CUNOR, Cobán  (Gwatemala), Ben-Gurion University of the Negev (Izrael) and University of Zaragoza (Spain).

2015-2019: Assistant at the Polish Academy of Sciences, Institute of Geological Sciences, Kraków, Poland.

2009-2015: Joint PhD study at the Polish Academy of Sciences, Institute of Geological Sciences, Kraków, Poland and the University of Bergen, Department of Earth Sciences, Bergen, Norway.

2013: Principal investigator in a scientific project on Campanian to Maastrichtian section in Zumaia, northern Spain. The project was conducted in collaboration with the Basque Coast UNESCO Global Geopark and  Universidad de Zaragoza, Spain. Funded by ING PAN (internal award for young scientists). Project title: Dating of the Campanian/Maastrichtian transition at Zumaia section, based on palynological record. Grant no.: 18/2013.

2012-2013: Principal investigator in a scientific project conducted at the University of Bergen, Norway, funded by The Research Council of Norway, YGGDRASIL programme. Project title: High-resolution dinoflagellate cyst biostratigraphy and palaeoenvironmental analyses of the Cretaceous succession in the Norwegian Sea area. Grant no: 219379/F11. Only 68 of the 262 applications were granted.

2011: Principal investigator in scientific project conducted at the Applied and Petroleum Technology company, funded by Foundation for the Development of the Education System, based onco-financing from the Financial MechanismEEA and the Norwegian Financial Mechanism. Project title: Biostratigraphical correlation of five wells in the southwestern Barents Shelf.Grant no.: FSS/2011/V/D3/W/0074/WS/U/0048.

2010-2011: Principal investigator in a scientific project conducted at the University of Bergen, Norway, granted by Foundation for the Development of the Education System, based on  co-financing from the Financial Mechanism  EEA and the Norwegian Financial Mechanism. Project title: Taxonomy and biostratigraphy of the uppermost Cretaceous and Palaeogene in the southwestern Barents Sea based on dinoflagellate cysts. Grant no: FSS/2010/II/D3/W/0020. Out of a 10 possible points, the project scored 9.

2006-2008: Archaeological excavations, PRYNCYPAT. Kraków, Poland. Technical support in the excavation of a site of particular archaeological interest in the Zakrzowiec and Modlnica villiages settlement (Kraków area).

2022: Organisation of car trip to Sicily, to collect geological samples from Monte San Nicola,  Gela, Italy. This trip was a part of international fieldtrip organised by local host and financed by ING PAN and INQUA – the International Union for Quaternary Research.

2021: Visiting Researcher Grant awarded for the year 2022 by the Research Council of Norway (RCN), under the Climate and Polar research call.

2020: Honourable nomination by the Scientific Council of ING PAN for the prestigious ‘Stanisław Staszic’ award, for a series of scientific outstanding discoveries in the field of geology.

2020: Internal award of the ING PAN for series of scientific publications in international peer-reviewed journals.

2020: Received funding from an International Cooperation Office of the Polish Academy of Sciences for international meeting on the Last Interglacial at ING PAN (postponed).

2019: Organisation and participation in international palynological meeting at ING PAN awarded by International Cooperation Office of the Polish Academy of Sciences.

2016: Nomination for Prime Minister's award for the outstanding doctoral thesis.

2015: Honourable mention of the PhD dissertation by the Scientific Council of the Polish Academy of Sciences.

2014: Award for the best scientist publication among young scientists at Kraków Research Center funded by the ING PAN

2014: Internal award for a scientific publication in Marine and Petroleum Geology, funded by the ING PAN.

2014: Internal award for the scientific publication in Cretaceous Research journal, funded by the ING PAN.

2014: Internal award for the scientific publication in Review of Palaeobotany and Palynology journal, funded by the ING PAN.

2013: Internal award for the scientific publication in Marine and Petroleum Geology journal, funded by the ING PAN.

2011: Scientific international project conducted at the Applied and Petroleum Technology company, Kjeller, Norway, awarded by the Foundation for the Development of the Education System, based onco-financing from the Financial Mechanism  EEA and the Norwegian Financial Mechanism.

2011: Training on palynological techniques at the Laboratory of Palaeobotany and Palynology, Utrecht University, The Netherlands, funded by ING PAN (internal project).

2010-2011: Scientific project, awarded by the Foundation for the Development of the Education System, based on co-financing from the Financial Mechanism  EEA and the Norwegian Financial Mechanism. Project conducted at Bergen University, Norway.

2004: The Erasmus Programme (EuRopean Community Action Scheme for the Mobility of University Students) grant for student exchange and fieldwork, Slovakia.

2003: Attendance in palaeontological excavations in Krasiejów (near Opole) organized by the Faculty of Geology, University of Warsaw.

Radmacher W., Uchman A., 2020b. Oxygen as a factor controlling palynological record: an example from the Cenomanian-Turonian transition in the Rybie section, Polish Carptathians. Marine and Petroleum Geology, 112. DOI: 10.1016/j.marpetgeo.2019.104067

VOLUNTARY WORK AND OTHER EXPERIENCES: In years 2005 and 2007 I spent time on tiny Isle of Iona (west Scotland) as a Voluntary Counselling Assistant. My primary duties were to provide a therapeutic environment for individuals suffering from a range of personal difficulties such as isolation, bereavement and drug addiction. As a volunteer for the Iona Community organisation in Scotland I was awarded a certificate of work. Later, in Poland and during my longer-term stays abroad, I gained a lot of experience related to social and medical care: disabled person care certificate and first aid certificate - Irish Wheelchair Association, Republic of Ireland; first aid course - Maltese Health Service.