Identification of clathrites in the geological record

Methane (gas) hydrates are composed of crystalline H2O that encages CH4 gas. They are found under the seafloor along continents at specific pressure and temperature conditions (Fig. 1). Changes of pressure/temperature at the seafloor, such as ocean warming or sea-level drop, may destabilize hydrates.

Widespread dissociation of hydrates may lead not only to regional disasters, such as giant slope failures, but also to global warming, as CH4 is a much more effective greenhouse gas than CO2. Indeed, some of the most severe greenhouse conditions, such as the Paleocene-Eocene Thermal Maximum and mass extinctions, e.g. the end-Permian extinction, are linked to worldwide dissociation of hydrates (Fig. 2).

Methane-derived authigenic carbonates (MDACs) precipitate due to anaerobic oxidation of methane at cold seeps. Gas hydrates commonly occur in genetic association with and directly within MDACs, which are termed “clathrites”. Since hydrates are not preserved in the rock record, ancient clathrites represent the only direct and tangible evidence of former hydrate occurrence, so they are particularly valuable research material. Yet, reports of fossil clathrites are very rare (none in the intervals representing hyperthermal events supposedly associated with hydrate breakdown) and their recognition is clearly underestimated. The main objective of this project is to diagnose the causes of this underrepresentation and provide solutions that would enhance the recognition of hydrate-associated authigenic carbonates in the geological record. 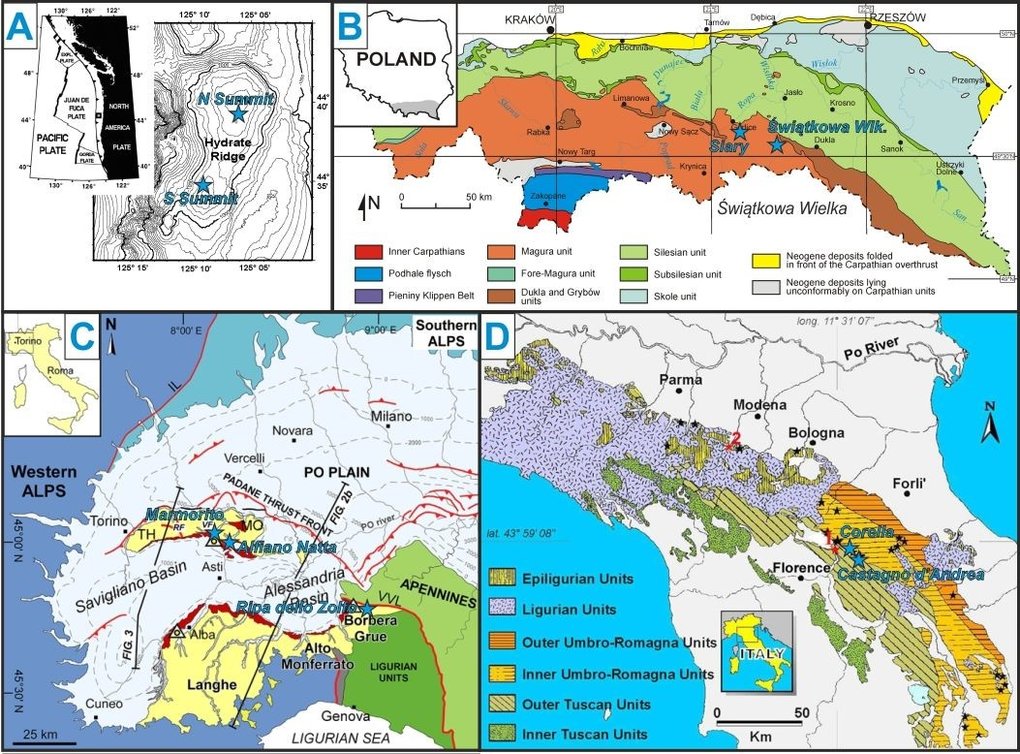 The research will be carried out on MDACs from one modern (Hydrate Ridge) and three ancient sections (Piedmont, Apennines, Carpathians) through international cooperation with the researchers working on MDACs in these areas (Fig. 3). Petrographic (optical microscopy, CL, SEM, EMP) and bulk δ13C and δ18O analyses will chiefly result in identification of potential ancient clathrites, for which advanced geochemical investigations will subsequently be employed. Application of ion microprobe, which enables in-situ δ13C and δ18O analyses, will allow reconstruction of growth mechanism and fluid sources for successive cement generations separately, some of which may be related to hydrates. Clumped-isotope analysis will provide the paleotemperature and δ18O values of parent fluids, which will verify which cements were related to hydrates. In-situ U-Pb dating will provide a timeframe of these processes, including those related to hydrate formation or dissociation. It will also allow constraining the depth and relative timing of carbonate precipitation at different levels of paleo-seep systems examined.

Direct outcomes of the project:

Conti S. et al., 2010. A contribution to the reconstruction of Miocene seepage from authigenic carbonates of the northern Apennines (Italy). Geo-Mar. Lett. 30, 449-460.