Mineral transformations and REE, Th, U, Pb distribution during alteration processes of monazite, xenotime and allanite in nano- and microscale, and analytical improvements of electron probe microanalysis and Raman micro-spectroscopy for these phases

The project aims to determine nano- and microscale mechanisms of monazite, xenotime and allanite alteration, and their impact on isotopic U-Pb record, as well as to improve selected microanalytical methods. The nanoscale observations and analyses provided crucial insights into reconstructions of fluid-mediated coupled dissolution-reprecipitation process, which is the main mechanism of alteration of monazite, xenotime and allanite. Part of the project involves TEM investigations and LA-ICPMS U-Pb analyses of experimentally altered monazite and xenotime, which demonstrate various degree of disturbance of the U-Pb system as a factor of temperature conditions; these results will have crucial implications on the monazite and xenotime petrochronology studies. Read more >>

The Earth at the end of the Archaean (2.5 Ga) was cooler. What was the hydrothermal system at that time, similar to younger ones, supporting life development? The rocks for the project were collected in Closepet granite, Indian Dharwar, where changes resulting from the action of hot mantle-crust fluids were identified. Minerals domains resulted from igneous crystallization and hydrothermal recrystallization give basis for fluids composition reconstruction. Age of domains can be determined. The optimal choice for such a research is titanite, due to its susceptibility to changes caused by interaction with fluids and the possibility of dating its primary and secondary domains. Read more >>

Bimodal magmatism related to Early Palaeozoic thermal event in the northern part of Gondwana has been widely documented in rock successions extending from Spain to Poland. Geochemical studies of acid and mafic rocks, albeit their close occurrence, commonly lead to different conclusions. This bimodal magmatism is either correlated with an intracontinental rifting, oceanic rifting or collisional events in Early Palaeozoic times. This project offers a new, integrated approach for understanding the deep-seated processes related to the Cambrian/Ordovician evolution of the Northern Gondwana from the perspective of the Sudetes (Poland and Czech Republic). Bimodal associations in the Sudetes are the objects of the multimethodological study (field studies, whole rock and Sm-Nd geochemistry, U-Pb dating and Hf and O isotopes in zircons, immobile trace element distribution in zircon). Read more >>

Towards understanding ore formation on Mars: new data from ExoMars/TGO and geochemical fingerprinting of meteorites

Ore-forming processes on Mars resemble those on Earth but little is known about the distribution and chemical composition of Martian metal deposits. Precious metals are excellent electrical conductors and will be indispensable in the development of future bases. This project brings us closer to understanding the metallogenic processes on the red planet by combining large-scale geological orbital data with high-resolution mineralogical data from a variety of Martian meteorites. Read more >>

We investigate a long section of the lower oceanic crust, Moho Transition Zone, and upper mantle recently drilled from the Semail Ophiolite in the frame of International Continental Scientific Drilling (ICDP) program (OmanDP project). Our project will help to identify key magmatic processes for pre-concentration of metals in higher levels of the lithosphere, where they can be efficiently leached by hydrothermal fluids leading to the formation of large-scale seafloor (SMS; oceans) or volcanogenic massive sulfide (VMS; land) deposits. Read more >>

We correlate sulfide–oxide rich intervals found in the lower crust section of two International Ocean Discovery Program (IODP) Holes 1473A and 735B located 2 km away from each other. Such an extensive magmatic horizon of ore minerals may be a source of metals for SMS deposits, and explain why SMSs with the highest metal grades occur on top of oceanic core complexes where lower crustal rocks can be effectively mined by hydrothermal fluids.

Burning heaps as "modern volcanoes" and pyrometamorphism in archaeological materials 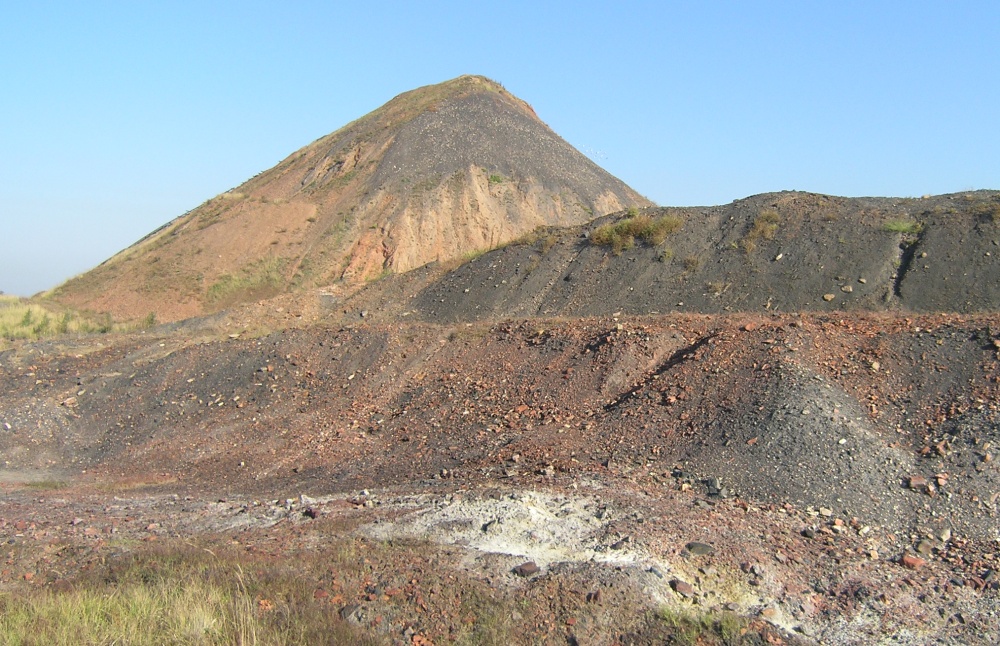 Processes occurring within burning post-coal-mining waste heaps of Upper and Lower Silesia are studied in the IGS PAS since 2010. They are pyrometamorphic, exhalative and weathering processes. The objects mentioned are, as shown by our research, potential models for many often unrelated natural geological environments and object: volcanism + basalts, fumaroles and geothermal fields; meteorites and other extraterrestrial objects; and zones of contact metamorphism. Since 2014 the research was directed towards geochemistry of exhalations and environmental impact of the heaps. Also, few monography chapters in thematic books arisen. Recently we study relations of the heaps and local biosphere and hydrosphere.

Minerals of the apatite group commonly incorporate trace amounts of uranium into their structure. Due to the different closure temperature of the U-Pb system for apatite, it can complement zircon or it may serve as the sole way of the age determination of rocks. In cases, where limited amount of the material is available, the in situ analysis using SIMS is the method of choice. However, SIMS is hampered by the lack of homogeneous apatite reference materials, and therefore, the goal of our project is to develop new, well-characterized reference material(s) for U-Pb dating of apatite.

An early Archaen sanukitoid from the Singhbhum craton as an igneous rock (3.3 Ga), poorly recognized in terms of magma evolution leading to its crystallization. An even more interesting problem is the identification of potential presence of fluids in that sanukitoid of not postmagmatic origin. Hydrothermal systems occurring during the early evolution of the Earth are of particular interest as they contribute to potential conditions for the development of life. Knowing results of our work on such a system in the Closepet massif, scientists from India proposed to our team to cooperate on recognizing fluids presence in sanukinoid rocks.

The project aims to expand our understanding of the influence of metasomatic processes that induce the transformation of REE-bearing phosphates and silicates (monazite, xenotime, apatite, zircon, allanite), which are used in U-Pb dating of magmatic and metamorphic processes. One of the tasks involves petrochronology and geochemistry of apatite and zircon in eclogites from Norway and Sweden, using EPMA measurements and LA-ICPMS U-Pb dating and trace element measurements.

Reconstructions of orogenic processes based on studies of selected objects

We carry basic research aimed at the reconstruction of geological processes, in particular, those that had been recorded in crysstaline rocks of the SW Poland. In 2021, the project focuses on mineralogical and tectonic phenomena manifested in various scales in the earth's mantle and the crust. In particular, the project aims to shed more light on the genesis and evolution of the Sudetic Ophiolite, and to identify processes that led to a probable heterogeneity of the Earth's mantle under the eastern edge of the Central European Volcanic Province.

Within the 2020 task, in cooperation with Mirosław Jastrzębski and Rafał Siuda, East-Sudetic metamanganolites were preliminarily studied. It was possible thanks to a visit to Romanian sites – Răzoare and Iacobeni-Arşiţa. In 2021 interesting materials were detected in Pustków Wilczkowski and Marcinków. Initial characterization of manganese mineralogy in the Śnieżnik Massif metamorphics and other rocks of the Kłodzko Basin was also conducted. A cooperation with Renata Jach of UJ also begun, dedicated to mineralogy of sedimentary manganolites of Western Tatras. The Pustków materials are anomalously enriched in V, Se, Pb and Cu. All the above tasks are initial and require continuation.

Collisions of large asteroids are (among other things) melting a fraction of target rocks. Impact glasses are made by shock wave isotropisation of minerals withougt melting (diapletic glass) or/and by whole-rock melting. Impact glasses are rare in case of very small impact craters (~100 m in diameter) because ranges of energies are not sufficient to melt silicates. The current project focuses on studying mystery piece of glass that was found in proximal ejecta blanket of Ilumetsa (Estonia).

Isotope study of fossils from the Cradle of Humankind caves, South Africa

Underground karst forms of the Bolt’s Farm located within the UNESCO World Heritage List Hominid Fossil Sites of South Africa World Heritage Site are being intensively explored by geologists and anthropologists searching for fossil material of Pliocene and Pleistocene fauna and, most importantly, archaic human species. A goal of our preliminary study is to asses the suitability of oxygen isotope analysis by SIMS and GS-IRMS as well as spectroscopic analysis using FTIR and Raman microscopy for the investigation of mammalian fossil teeth from the Bolts’ Farm.